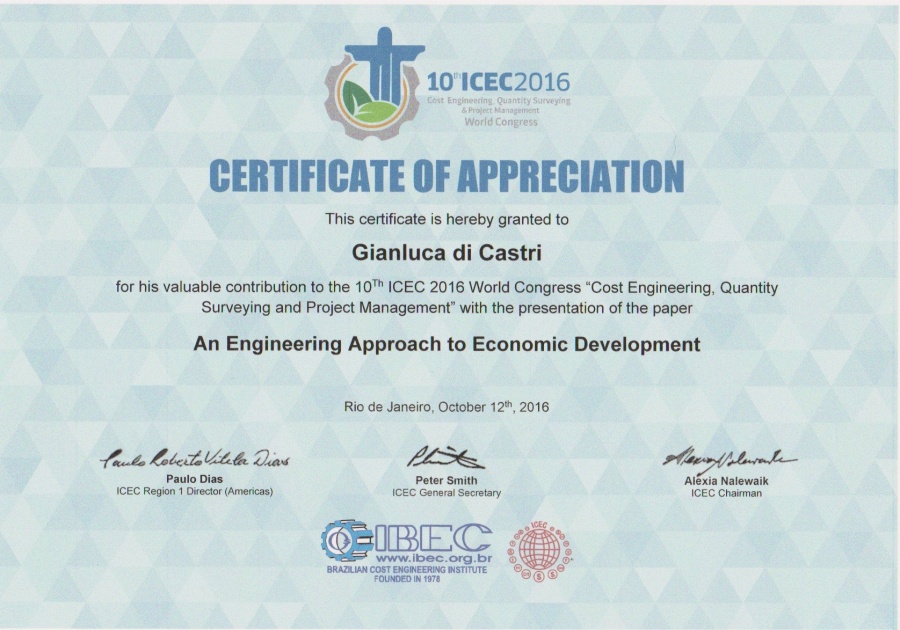 A lot of theories and consideration have been written up to now on economic development, mainly by sociologists and economists. The purpose of this paper is to analyze the problem from an engineering point of view, focusing on quantitative aspects as well as try to point out some conditions under a proper equation, namely shifting from words to figures.

Useless to say, mathematics will never govern the economy, since the behavior of human beings is never perfectly rational, however some mathematics can help.

This research analyses the problem from a different perspective, that of an engineer, who, by nature and training focuses on a quantitative approach,  with   greater attention to the quantities and to the figures, trying to solve difficulties by analysing in the form of an equation. In plain words, shifting the focus from words to numbers .

While recognizing that, unlike engineering, economics is not an exact science, because it must take into account the irrational behaviour of human beings, however mathematics are important as they can help in defining the necessary conditions, not always sufficient, to achieve a goal.

We are living in a time where economic development is badly considered, a lot of people thinks about economic decrease supposing that the standard of life of the next generations will be worst than ours, by reversing the very concept of progress without giving any rationalisation to their pessimist attitude. This is very common in Europe, where people is used to cry on themselves.

Situation becomes even more confused since generally the matter is considered under a political point of view, without considering the scientific approach or taking into consideration only those scientific data that support the view of the politician. Mass media add further confusion, sometimes in good faith.

It is not for economists or engineers to decide whether economic development is good or evil, this is a political matter. However, once it has been defined, economists and technicians have to define the conditions to be met and actions to do to implement the choice and achieve the goal, as well as the impediments to be removed, and to calculate costs and benefits both in monetary and real terms.

We like to remind a statement from Pope St. John XXIII, on the introductory speech to the opening session of the Ecumenical  Council Vatican II: “We seem to have to fully disagree from these prophets of doom, who always proclaim the worst, as it the end of the world would be coming”

(paper presented to the ICEC World Congress in Rio de Janeiro, October 2016 – link to the full text above)